It’s no secret that I love a good Zombie flick. Maybe they resonate with me because I consider myself a survivor, so much so, that I would never consider participating in a “Zombie Run” or the like because,

A. I would never want to “be” the zombie (I’m a Survivor of course.)

B. I have no desire to run from zombies – if you can’t kill them, what’s the point?

Since we are coming into that zombie time of year (October and the return of The Walking Dead) I decided to research Zombie origins to satisfy my curiosity. I am in no way an expert and my “sources” have been gathered exclusively from the wonderful world of The Internet, and my own brain.

Zombies can be classified into two categories:

Category A: Zombies: Corpses raised from the dead by magic or witchcraft as by Haitian voodoo.

Category B: Zombies: Fictional undead creatures originally found in mythical literature, such as that age old classic, the ancient Mesopotamian Epic Poem – Gilgamesh, where we are told “the dead will go up and eat the living.” Or, in more recent centuries, Shelley’s Frankenstein or the novelette’s of H.P Lovecraft. These undead creatures appeared in fictional written and oral traditions until the 20th century when the zombie genre expanded to include film and TV (i.e. 1968 Romero classic, Night of the Living Dead.)

The Zombies that fascinate me are the second category, fictional creatures. I believe voodoo, witchcraft and satanic forces exist in this world. Demons are real. I have first-hand knowledge. They are not funny. They are not cool. I do not choose to derive pleasure from anything satanic, nor will I ever. But that is a topic for another post.

When I refer to zombies, it is the creature who, usually by the introduction of some sort of infection or virus has killed the host (i.e. – the human is dead) and the zombie virus now inhabits the body. There is nothing satanic or demonic at work, but rather a super nasty, and deadly, disease that utilizes a corpse.

So what is it exactly that fascinates me (and literally millions around the world) about the zombie genre.

Could it be the Fear of death?  Does our fear of death present in such a way that not only do we fear our own deaths, but we take it a step further and fear those things that are dead? Possible.

Yet, I do not fear death. On the other hand, I definitely do not want to get eaten alive. That would be horrible. Zombie or shark or remote jungle cannibal – really, who doesn’t fear getting eaten alive?

As I considered my fascination with the zombie genre a little longer I realized that it was not so much the zombies themselves that fascinate me but rather, the idea of Apocalypse that I find most often goes hand in hand with modern zombie stories.

If I were to ask a stranger on the street, to define “apocalypse” I believe most would define this word to mean a specific catastrophic event in which the world as we know it is destroyed and the ensuing struggle for survival in the aftermath of the event (i.e. zombie virus, Biblical prophecy, world-wide death due to flu virus, world war/bombs, collapse of the internet/electricity, etc…) Truthfully, this has become the modern definition of the word.

However, the original meaning of the Greek word, apokalypsis (apocalypse) according to Strong’s concordance is: 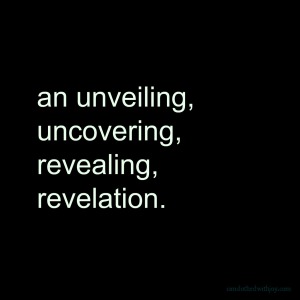 It seems to me, the essence of apokalypsis (apocalypse) is the action of something that was once hidden and is now being revealed.

As in: Jesus revealed God to man.

“Jesus said to him, ‘Have I been with you so long, and you still do not know me, Philip? Whoever has seen me has seen the Father. How can you say, “Show us the Father?”’” John 14:9

If this is the essence of apocalypse, no wonder millions are fascinated with it. What is more deliciously frightening than the unknown?

I believe we have deceived ourselves into believing that what we know is all there is, and what we do not yet know is simply, undiscovered – yet, discover-able by us. However, on some level, the thought of an unknown, the revelation of that which we have never known before, or ever could know on our own, terrifies, exhilarates and ultimately utterly fascinates us.

We search for truth in that which is not true (like zombies taking over the earth) because there is something inside of us that knows there is a veil over our eyes, that there is more than we could ever come to know on our own short of a some sort of miraculous unveiling.

I suppose my fascination with the zombie apocalypse genre is more than just your everyday, common fascination with creepy stuff; I believe it is a longing for the revelation to, at last, be revealed. A crying out of my flesh and my spirit, in my own unique way, for the restoration of how things were meant to be. It is a longing for an end of this temporary existence and a stepping into the eternal existence with God, through Jesus, that has been The Creator’s intention since the beginning of time.

Call me crazy, you won’t be the first, but it won’t curb my longing for the apocalypse.

These are my thoughts, I proclaim freely that I am no expert, just a simple soul who loves Zombie stuff and longs for the day when the veil will be removed and all will be revealed.  I welcome discussion and corrections!

6 thoughts on “Longing for the Apocalypse”

Join 673 other subscribers
Follow Clothed with Joy on WordPress.com