I’m not exactly sure what elements in my life have banded together to create this person that I have become but I think living in third world countries and being a single mother have certainly contributed.

Long story short: Last night I took my iPad to a kiosk in the mall to be repaired. Over the summer the glass got stepped on, broke and I subsequently tried to fix it at home. Bad idea – I messed up the wifi receptor and had to have it replaced.

After being thoroughly rebuked by 16 year old Ron at the kiosk, “In the future, never try to fix this at home.”  I was given a quote of $65 to replace the wifi thingy and to clean off some remaining adhesive and restick the glass. Thirty minutes to fix.

Thirty minutes later he hadn’t even started. I had all four kids with me. In the mall.

They had already raided Sephora and were covered in make-up. Loads of kid homework and exhaustion were looming at home. The best decision seemed to be: go home and pick up the repaired iPad the next morning. Young Ron said that was fine and that, no, I did not need a receipt.

This morning when I returned to pay, a different man charged me $75 for the job. $75. WHAT! I was quoted $65. The man talked to the kiosk owner on the phone again and again but the owner refused  to budge on the price.

There was nothing left for me to do but wait. I was told the boss would be there in person in 20 minutes. *I seriously considered plopping down $70 in cash ($65 + 7% sales tax) and taking my iPad and leaving. If he said anything I was going to reply, “Arrest me!” and walk off. But the ATM only gave out $20s.*

I knew the owner wouldn’t be there in twenty. Still, I stood right there in front of the guy at the kiosk for 20 minutes. He became increasingly uncomfortable. Then I waited 10 more minutes and when the guy still would not charge me $65 for the repair, although I asked him, I spoke to a security guard and asked where I could make a complaint.

I want my ten dollars!

While I was writing out the complaint at Guest Services, the owner finally arrived. He had kept me, a customer, waiting for 40 minutes. For $10. The owner then called Ron and asked how much he had quoted me the night before (wait, couldn’t the boss have done this 40 minutes ago?) The owner hung up and charged me $65.

I own my own business. The amount of money that I could have made in those 45 minutes at the mall had I been working is MORE than the $10 I was fighting for. I actually lost money. But, you see,  I have become that  person. I knew I was being scammed. The owner of the kiosk assumed that I would grumpily pay the extra $10 in order to move on with my life. He was wrong.

He had no earthly idea that he was dealing with that person, although he probably has a more colorful name for me.

Kind of silly that I just wrote about my “Good Morning” Mission yesterday. Oh well,  you can follow the crazy on bloglovin’

I think my five-year-old P has gotten pretty bored with the staying home in the mornings routine. She’s taken to collecting random things from the house and asking if she can go outside and sell them. I try to discourage this, but she has some mighty long eyelashes and she works them. The last time she asked we negotiated for a while and she somehow convinced me to put the miscellanea in a box and send it to Canada.

This morning she had a single doll shoe, a plastic doughnut and a dime that she wanted to sell. She also carries around a metal briefcase of random other things that I don’t touch because it appears to be smeared with lip gloss.

I finally caved under the pressure, so I told her she could go out front and “sell” them on the steps. A few seconds later my brother looked out the window and said, “How far are you going to let her go? She’s already made it to the house with the For Sale sign.”

I can move pretty fast and by the time I vaulted through the construction obstacle course in my “new” kitchen, she was already standing on our neighbor’s porch pushing their doorbell.

Maybe she’s got a future in door to door sales: vacuums, glass coffins, Bibles… Keeping her away from the Jehovah’s Witnesses might also be a good idea. In the end my brother bought the dime for 11 cents. I didn’t know he was that generous. 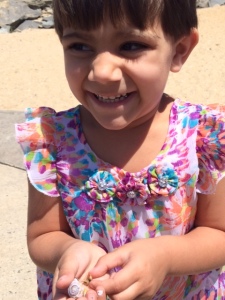 I should send her to the train station to beg (or sell her crap). We’d be rich. Who could resist this face?

Over the years I’ve streamlined the whole Tooth Fairy process. It goes something like this:

(Kid brings purse, I hand them a dollar. Kid attempts to hand me the tooth – I point them toward the trashcan.)

When my big kids were younger I attempted to do the sneaky pillow thing. The truth is, I don’t think I remembered even once to put the dollar under the pillow after they were asleep OR retrieve the tooth. (I don’t know which is worse, actually retrieving the tooth from under the pillow and having to dispose of it, OR the thought of the nasty tooth lost somewhere in, or under, the bed. Ew.)

I did try. I used to fold up the dollar and stick it in my bra so I would remember to do the switch before I went to sleep. It never worked. I would wake up in the morning, go about my business and eventually discover a dollar bill plastered to my boob as I was getting ready to shower. There were a few times I discovered the dollar bill IN the shower.

The new system works for us. Kids get money. I don’t have to touch the nasty tooth. And my days of sleeping with dollar bills in my bra are over. Tooth. Fairy. WIN!