Ugly, non-Rebecca color on walls. Must paint over.

I had some mini-helpers in the morning, but eventually they said I was “mean” because I kept reprimanding them for stepping in paint and tracking it around the floors. Meanest mom ever. I know.  Mostly they laid around and watched Monster Week on Animal Planet. 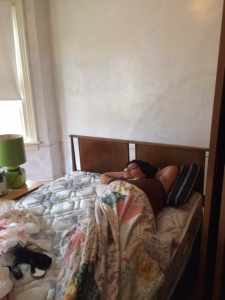 I hope to still get the upper wall color on tonight. The good news is that in my frugal scrounging in the basement and various closets I found enough paint left over from previous tenants to prime the whole room. I also found the exact color I want to paint the upper portion of the wall. Go me saving $50 or so and recycling, reusing, repurposing.  You’re welcome.

I am pretty exhausted. Around four o’clock I sat down on the bed to eat some watermelon. By the time the guy on TV was telling his abducted by aliens story I was fast asleep – on the mattress that the previous owner did NOT die on but did trickle away the last years of his life languishing on. So, yeah, I was that tired.

Years ago my mother suffered from depression. I was a sophomore in college at the time and living on campus in another State. I knew she was struggling and I would call home and worry about her from afar. I felt helpless to do much more, but we kept on as a family; living, loving, moving forward.

He was the youngest in our family and the only child still living at home during the days of mom’s depression. She wrote in the letter that my brother helped her by making her sit with him and watch episode after episode of fishing shows. In some strange way, Bassmaster with her son was instrumental in drawing her back to the land of the living.

It’s no wonder that I can still remember the contents of the letter after twenty years, who knew that reality fishing programming could help open a door to the world beyond depression?

Last night, while I was watching a favorite fishing show myself, the memory of that time and mom’s letter came to mind. I’m not suffering from depression, but it was 10PM and I still had much to do before bed. Yet there I was, utterly mesmerized as I watched a man describe which fishing line worked best in various conditions and what types of bait he found most useful to catch illusive kinds of fish. As he held up lure after lure, I was hooked.

Maybe there is something healing or magical in watching a man fish?

Maybe Animal Planet or the WFN hold some sort of key to the cure for all kinds of ailments? 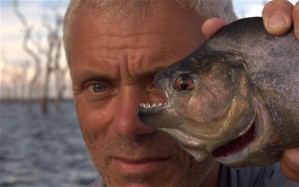 Join 673 other followers
Follow Clothed with Joy on WordPress.com